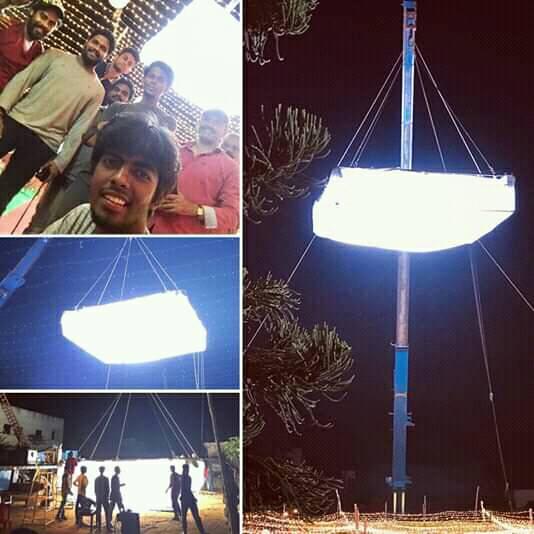 Sujith Sarang shot to fame for his cinematography in Tamil feature film D-16 which was a runaway success.

Currently he is lined up with prestigious projects like Naragaaswaran, Taaxiwala…and he is shooting almost in all South Indian Languages. 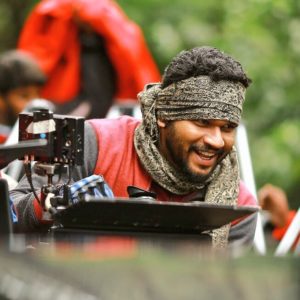 He shares his experience to SICA

Cinematography, being the art of painting with light, precise lighting plays a pivotal role. Lighting up a large space for night shoots is always a fascinating task and to make it look as natural as possible is taxing. Speaking of night lighting, mimicking moonlight is usually done with helium balloon lights. We had to shoot such a night sequence in a large open space for the upcoming movie Dear Comrade.

We planned to create a moon ambient lighting effect, but could not acquire balloon lights due to a lot of production and practical constraints. As we were on our own, we decided to make our own customised metal rig with provisions to fix multiple lights. We planned the working exposure and chose the lights to be fixed accordingly. 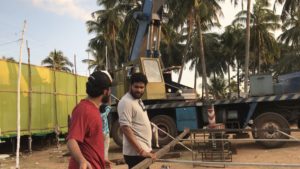 The knowledge of general physics and sketching helped in designing the rig methodically. Considering the weight of the lights and their ballasts, the materials with appropriate tensile strength and durability were chosen. The rig was welded and made a finished product by local welders of the village under our supervision. The cumulative weight of lights,ballast and the rig was estimated as 450kgs. To lift such a hefty setup, we needed a sturdy industrial crane. As the shooting location was near the coastal area, it was convenient for us to hire a container lifting crane.

We rigged four 4kv HMI PAR lights and positioned them accordingly to get the right angle of light. We wrapped the bottom of the rig with 40x40ft chimera cloth to make it a large diffused light source. We tested the setup for two consecutive nights after shoot and made sure it worked flawlessly. 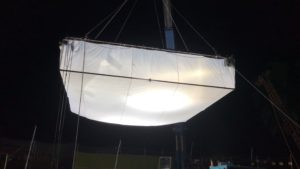 It was hung at a height of 100ft from the ground like a chunk of moon hanging overhead illuminating an area of 100x100ft with an exposure of f/4+. As we had to film in various frame rates which involved high speed shots, that was the exposure we planned for. Safety was our primary concern, as the shoot involved a cast and crew of nearly 300 people. So we made sure that strapping belts, metal wires, counter ropes in the respective positions were used properly. With that, we were able to turn the camera 360 degrees without any hassle and still get the same lighting effect.

The sequence had a long take steadicam shot in which the camera literally faces all directions. We did twice the work in half the time to finish up the process of rigging the lights, lifting the setup and shooting, in just one single night considering a bunch of practical difficulties. This setup was a cost efficient and time efficient solution we came up with, whereas a helium balloon would have cost us a lot of both. Regardless of the fact that the execution of this “Poor man’s Moon” was onerous as it involved a number of challenges, solving them one after the other and obtaining the desired output was really a venture some experience. 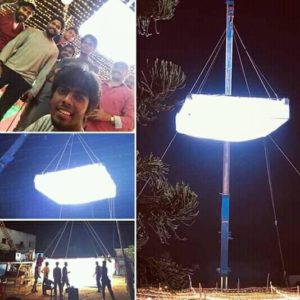