August 19th very important date for the visual creators around the world, invention of Photography was officially announced to the world and everything changed from thereafter. 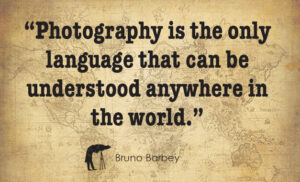 World Photography Day originates from the invention of the Daguerreotype, a photographic process developed by Frenchmen Louis Daguerre and Joseph Nicephore Niepce in 1837. According to the reports, On January 9, 1839, the French Academy of Sciences announced about the Daguerreotype. About ten days later, on August 19, the French government purchased the patent and announced the invention as a gift free to the world (without copyright).

However, the idea to recognize World Photography Day didn’t take hold until 1991 – and for that, we can thank respected Indian photographer OP Sharma.

He proposed the idea to several masters and photographers around the world, about 150 of them, including the RPS and the Photographic Society of America (PSA)… by the beginning of 1991, everyone took a unanimous decision and we started celebrating World Photography Day that year.”

Daguerre’s View Of The Boulevard du Temple, taken from the window of his apartment in Paris in 1838, is a unique example of early street photography that includes the first known recorded image of a human being.

It shows a busy Parisian street that would have been filled with people and carriages. However, the 10-15 minute exposure meant that none of them stayed still for long enough to be recorded.
The photograph originally was made by Nicephore Niepce, using silver chloride coating a piece of paper. However, the photo would eventually turn fully dark as he knew no way to remove the silver chloride from the paper to preserve the photo.

Daguerre was a professional scene painter for the theatre Between 1822 and 1839 he was coproprietor of the diorama in paris an auditorium in which he and his partner Charles-Marie Bouton displayed immense paintings, 45.5 by 71.5 feet (14 by 22 metres) in size, of famous places and historical events.
Nicephore Niepce, inventor living near chalon sur  saone a city 189 miles (304 km) southeast of paris was interested in lithography a process in which drawings are copied or drawn by hand onto lithographic stone and then printed in ink. Not artistically trained, Niépce devised a method by which light could draw the pictures he needed.
Daguerre and Nicephore Niepce they devised a 3 way step into photography
Exposing the image
Developing the image
Fixing the image.
CJ Rajkumar
Author/Cinematographer
x